Camping in the dark

I am still afraid of the dark.

Less afraid of the metaphorical dark; I can allow myself now to think about my son and grieve and be okay with grieving. Last night during savasana in yoga (dimmed lights, peppermint oil, thunder cracking through the open windows) I intentionally thought about holding him after death, the first time we were able to cuddle and swaddle him like a “normal” baby, rather than the propped up kangaroo hold. I remembered the stickiness of his postmortem skin and how, though many women I know wish they had gotten to hold on longer to their dead child, I was ready to let him go, wanting my memories (of touch, of sight) of him alive to be more vivid and more dominant than the memories of him not alive.

But the literal dark? Oh, that’s another story. This past weekend K and I went on our annual anniversary trip. For the past three years we have used our wedding weekend to go on a camping/canoeing/backpacking trip (even on our honeymoon). We both love spending days out in nature, no amenities, the more remote the better. As K jokes, what better way to test a marriage than to spend three days trapped in a canoe with your spouse? But in seriousness, these are always rejuvenating weekends for us, and this time was no exception – except that due to these posts, I was even more aware than usual of my fear of the dark.

On Friday morning, we packed up our car, canoe on top, and headed to Flambeau River State Forest in northern Wisconsin, a 7-hour drive from Chicago. I should say – we are pretty experienced campers/backpackers/paddlers. We registered at REI for our wedding. We camped and canoed on our honeymoon. When I was a mere four weeks pregnant, we took a whitewater canoeing class; K used to teach whitewater kayaking (she taught me, too, but you can’t canoe-camp in a kayak). Our beautiful canoe was a gift from her godmother (the one who died just three weeks after Ander, suddenly).

Canoe on the Flambeau

We arrived on Friday afternoon at Oxbo, a camp at one of the river access points. Because we were reluctant to get out all the cooking gear, we dined on leftover pizza (heated in foil over the fire). At this campsite, there was one other tent, with two guys around our age. On one hand, that made me feel safer (other people!), and the camp was fairly close to a main road. On the other hand, that made me feel more scared (what if they were homophobic? Or rapists? Or both?). The night was bright, with supermoon remnants, but I still woke up in a sweat when I heard them walking past our tent around 2:45 a.m. All my irrational anxious thoughts surface when I am sleeping in a tent, especially our small backpacking tent (we have a four-person tent, too, that we got because we thought we’d be camping with a baby this summer….). I don’t like that I think unjustified evil thoughts about other people. As it turns out, these guys were perfectly nice and just there to fish. They were drinking fairly heavily and just taking a midnight walk to the fishing point to keep trying their luck. They had nowhere to be in the morning, and didn’t care what time it was, and that was all. I was still scared. 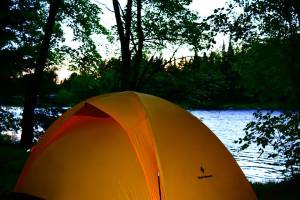 The next day was perfect. The Flambeau is a gorgeous river, and we would see only a handful of people on our entire two-day journey, and none for the vast majority of Saturday. Again, I love the solitude of that, the feeling of being in the wilderness. But it also terrifies me. What if something happens to one or both of us? What if we are attacked by a person, or a bear, or something? We prepare. We have our med kit, our pocketknives, our bear bag. Our gear was all tightly lashed in the boat, and wouldn’t go anywhere even if we dumped the boat on a rapid. But still.

The Saturday night campsite was, in some ways, terrifying to me. Lovely, remote, with not a soul in sight for at least the last five hours. Beautiful. But also…  there was an ATV trail nearby, and I had a lot of trouble sleeping, even with my pocketknife by my pillow. I just can’t relax at night while camping, even if I’m exhausted, which I usually am. We had paddled for 18 miles that day, with another 10 to come the next day, with more significant whitewater (class II-III rapids). Do you ever notice how LOUD chipmunks can be in the underbrush? Or how unnerving it is when a bird starts chirping, loudly, at an hour no bird should be chirping (like 3 a.m.)?

I would never do this without K. She is a champion camper, very experienced. She used to work in a wilderness therapy program in Utah, traipsing around with adolescent drug addicts in the mountains for weeks on end. She can bust a fire with a stick and a piece of rope. With a campstove, she makes MEALS. Like jambalaya. Pancakes with fresh raspberries picked by the side of the trail. Muffins. Pasta primavera with chicken sausage. French press coffee. Oatmeal with nuts and blueberries. She’s GOOD. I mean, I help, and I’m not too shabby myself. But camping with us is guaranteed to be way better than any camping you’ve done before, if I do say so myself. And this is backpacking camping, without a car and a cooler.

Anyway, this is about my fear of the dark, right? Yeah. I still have that, in spades. Fortunately, the paddling was glorious, stretches of flatwater where the sky and shore were lined with wildlife (deer! eagles! hawks! turkeys! a PORCUPINE!) and stretches of challenging rapids that really tested our skills. (Fortunately, K is also a more competent paddler than I am. I nearly had a panic attack at the last rapid. No one wants to dump the canoe with all the gear when you can see the takeout). 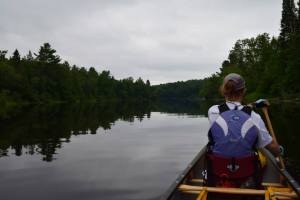 Flatwater on the Flambeau

And fortunately, I wasn’t too exhausted, despite my two nights of very little sleep. We got to the takeout much earlier than we anticipated on Saturday, which was good, because we intended to drive halfway back home before finding a campsite for our last night of vacation. We paused to fish, and bathe in the river (biodegradable soap, of course). I was looking forward to our last night, because we were intending on camping in the national forest, where it would be a more traditional campground with a ranger and likely, many other people.

However, the clouds were rolling in and threatening to be a major storm. As much as we didn’t want vacation to be over, no one enjoys setting up a tent in a downpour, and then sleeping outside in such a storm, just because. Especially because we had our smaller, less reliable tent when it came to being waterproof. So, we decided, reluctantly, to drive home. Via Culver’s, of course! If you don’t know of Culver’s, it’s a Wisconsin chain. They serve typical burgers and fries, but also have custard, and it’s all Wisconsin dairy and beef. Like McDonald’s, but you feel better about it because it’s locally sustainable. At least, that’s what I tell myself.

One of the best parts of camping is getting home, ironically. That first hot, delicious shower after several days of dirty, slipping into clean sheets on a comfortable mattress. This time, it was less satisfying, since we had really only been gone two days. So, the next day, we went out to Indiana Dunes National Lakeshore to do some hiking. It was a cloudy day, but very humid. There weren’t a ton of people on the beach due to the wind and the waves, but that’s okay. After hiking at the dunes, we paused on the beach to sit and think of our babies – Anderson, but also the babies we intentionally remember, including Mabel, George and Bea (and many others! It’s important to me to remember your baby). K has a new camera (she has decided her new hobby is photography, so that she can take pictures of our future child – that was her intentional act of optimism this month). I’m no CarlyMarie yet, but here’s our boy at the seashore with us. I liked writing all the names in the sand and then watching people walk down the beach and look at them. I wonder what they were thinking? At the very least, they were mouthing our son’s name. And that’s something, I guess! 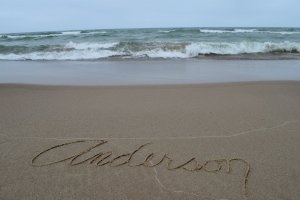 This entry was posted in Uncategorized and tagged #babyloss, #bears, #dark. Bookmark the permalink.

1 Response to Camping in the dark