Ander day… and the day after

Posted on February 2, 2015 by babylossmama

Ander day, as we ultimately decided to refer to Saturday (aka the one year anniversary of his last day, or the day we got to cuddle him for 36 hours straight), turned out to be rather perfect. We went for a morning hike at the Aboretum, stopped by a friend’s housewarming party, then headed to Montrose Harbor to fly kites. 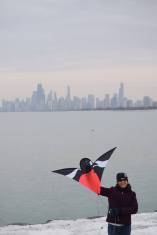 We had time for a quick run to Costco, then off to dinner with our friends, which was delicious, though a bit sad, as they had to delay their trying-again process by yet another month or two due to some medical news.

Best of all, as we were eating dessert, it started to snow. I was so hoping it would, and it did! Definitely a sign from Ander, as our polar vortex baby sent us winter storm Juno, which gave us a 12-hour blizzard warning and 18 inches of snow!

It was the day after Ander day that was rough. The snow was lovely, and we enjoyed snowshoeing in it, even though it was technically still blizzarding (living here, though, you know how to dress appropriately). Since we were snowed in (our street and sidewalks still aren’t plowed), we figured we would be responsible and do our taxes. Can you see where this is going, fellow babyloss moms?

After some research, we determined we could, in fact, claim Ander as a dependent, as he did live and die during the year (there is a box for that, in fact). But we need his social security number. Both K and I are 90% positive we applied for and received this number, but… we couldn’t find the card. Let me be clear: I saved EVERYTHING of Ander’s. Yet for some reason, one folder seems missing, and of course, it not only has his SS card, but also the additional identity-document I need to apply to see his number – the death certificate. Birth certificate I have, but the funeral home paperwork is also MIA.

What it also meant was that we had to go through every single file and every document related to Ander, something I had been avoiding because I didn’t want to, and wasn’t ready to, rehash that all emotionally. I still wasn’t, yesterday, so it was a very rough day. Today has been spent calling the SS office and the funeral home to try and get a new death certificate so that I can take that and his birth certificate to a SS office and find out his SS number so we can file our taxes. Hoping the latter gets back to me soon… guess my next option would be the hospital. Sigh.

In short, Saturday was great. Sunday was rough.

9 Responses to Ander day… and the day after